Although the territory was already populated in prehistoric times, as evidenced by remains found in the regions of Lundas, Congo and the Namib Desert, only thousands of years later would Angola be inhabited by more organised peoples. Early in the sixth century B.C, one of the greatest migrations in history took place. The Bantu people, traveling from Northern Africa, probably the region now known as the Republic of Cameroon, settled in Angola, easily imposing itself against the existing less evolved peoples. The presence of the Bantu in Angola resulted in the forming of various groups that would come to stabilise in ethnic groups, which have persisted to this day.

In 1484, the Portuguese arrived in Zaire, under command of the explorer Diogo Cão. At this time, the first major political unity of the territory, the Kingdom of Congo, was already established and formed an alliance with the Portuguese. The Portuguese colony in Angola was established in 1575, with the arrival of Paulo Dias de Novais, the first Portuguese governor to come to Angola.

In 1850, Luanda was already a great city, with many trading companies and, along with Benguela, it exported palm and peanut oil, wax, gum copal, timber, ivory, cotton, coffee and cocoa, among other products.

In 1836, the slave trade was abolished and in 1844, the ports of Angola were opened to foreign ships. With the Berlin Conference, in 1885, Portugal formalised the territorial occupation of its colonies, including Angola. The territory of Cabinda, north of the Zaire River, was also given to Portugal, based on the legitimacy of the Treaty of Simulambuco, a protectorate treaty signed by the king of Portugal and the princes of Cabinda in 1885.

After a time-consuming and complicated implementation, the late nineteenth century would bring the organisation of a colonial administration in direct relation with the territory and with the people it governed.

The end of the monarchy in Portugal, in 1910, as well as a favourable international situation, would lead to new reforms, at the administrative, agricultural and educational levels, turning Angola into a Portuguese Overseas Province.

In the second half of the twentieth century, the emergence of the first nationalist movements led to the creation of more explicit political organisations, which from the 1950’s onwards initiated diplomatic campaigns all around the world, fighting for independence. Colonial power would not give in to the proposals of the nationalist forces, which led to direct armed conflicts, known as the “Armed Struggle”. The movements that played the major roles in the “Struggle” were the MPLA [Movimento Popular para a Libertação de Angola] (Popular Movement for the Liberation of Angola), established in 1956, the FNLA [Frente Nacional para a Libertação de Angola] (National Front for the Liberation of Angola), which appeared in 1961 and UNITA [União Nacional para a Independência Total de Angola] (National Union for the Total Independence of Angola), which was founded in 1966. After many years of fighting, on 11 November 1975, the country achieved independence. 27 years after Independence and 41 after the beginning of the Armed Struggle, peace was at last consolidated, on 4 April 2002, by way of the agreements signed in Luena, Moxico.

Since 1992, the year of the first general elections, Angola has been governed under a system of multi-party democracy. The MPLA, together with UNITA and other political forces with seats in parliament, managed the reconstruction of the country. After the impasse imposed by the war, which lasted until the early 2000s, normal democratic life returned to the country and general elections were held in 2008 and again in 2012.

On the international scene, Angola has strongly supported initiatives to promote peace and settle regional disputes, favouring diplomacy in the prevention of conflict and the defence of human rights.

Angola is currently a member of the United Nations Security Council and holds the Presidency of the International Conference on the Great Lakes Region (CRGL). 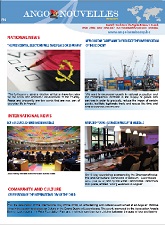